John Hester unveils new book â€˜A Collection of (Mostly) Rather Eccentric Commentaries and The Night the Tet Offensive Began.â€™rnnnrnrnnnrnnnTampa, Fla. (PRWEB) October 22, 2014nnCommentator and author John Hester gives his say to issues that plagued and continue to plague the world as he unveils â€œA Collection of (Mostly) Rather Eccentric Commentaries and The Night the Tet Offensive Beganâ€ (published by Xlibris).nnrnnnWar in the Middle East and in Europe; the fight against deadly viruses (Ebola and the likes); and economic struggles due to inflation are just some of the issues that the world faces today. And in almost all of them, the US is involved in one way or another. How much strain do they cause the nation? Hester offers his unique opinions and perspective on the various matters, may it be political, social or economical, within this thought-provoking text.nnrnnnIn its entirety, this notable read houses a collection of some of the commentaries Hester wrote in his editorial-page column over his 45-year career. Most of his commentaries were about local matters of specific interest to the community in which the newspaper was located, but all of these are of a more universal scope â€” allowing readers from all over the world to relate.nnrnnnâ€œA Collection of (Mostly) Rather Eccentric Commentaries and The Night the Tet Offensive Beganâ€rnnnBy John HesterrnnnHardcover | 6 x 9in | 140 pages | ISBN 9781499050646rnnnSoftcover | 6 x 9in | 140 pages | ISBN 9781499050653rnnnE-Book | 140 pages | ISBN 9781499050660rnnnAvailable at Amazon and Barnes & NoblennrnnnAbout the AuthorrnnnJohn Hester was raised in the small central Florida town of Inverness. He graduated from the University of South Florida in Tampa in 1965, with a degree in physical education. After teaching school for one year, he served in the U.S. Army for two years, from September 1966 to September 1968. He took basic training at Fort Benning, Ga., was then stationed for 10 months at Hunter Liggett Military Reservation in California and finally served 11 months in Vietnam â€” the first five months as a clerk-typist at 18th Engineer Brigade Headquarters in Dong Ba Thin, next to Cam Rahn Bay, and the second six months as an information specialist at 937th Combat Engineer Group Headquarters in Pleiku in the Central Highlands. During his time in the Army, he had the Forrest Gump-like experience of witnessing firsthand two major events of the turbulent 1960s: he visited San Francisco several times during the summer of 1967, which subsequently became known as â€œthe Summer of Love,â€ and he was in Vietnam the night in January 1968 when the enemy’s Tet Offensive began. After being discharged from the Army, he spent a year writing a novel for which he could not find a publisher and then embarked on what was to be a 45-year career as a reporter/photographer/editor for small weekly newspapers.nnrnnnXlibris Publishing, an Author Solutions, LLC imprint, is a self-publishing services provider created in 1997 by authors, for authors. By focusing on the needs of creative writers and artists and adopting the latest print-on-demand publishing technology and strategies, we provide expert publishing services with direct and personal access to quality publication in hardcover, trade paperback, custom leather-bound and full-color formats. To date, Xlibris has helped to publish more than 60,000 titles. For more information, visit xlibris.com or call 1-888-795-4274 to receive a free publishing guide. Follow us @XlibrisPub on Twitter for the latest news.nnrnrnnnrnrnnnrn 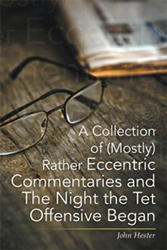 rnnnrnnnrnNote: We are not responsible for typo error, price change, substitute item, or available of item from online ads.rnnnrnrnnnrnhttp://www.prweb.com/releases/2014/JohnHester/prweb12268414.htm

Activities in front of White House during ASEAN-U.S. Special Summit 2022